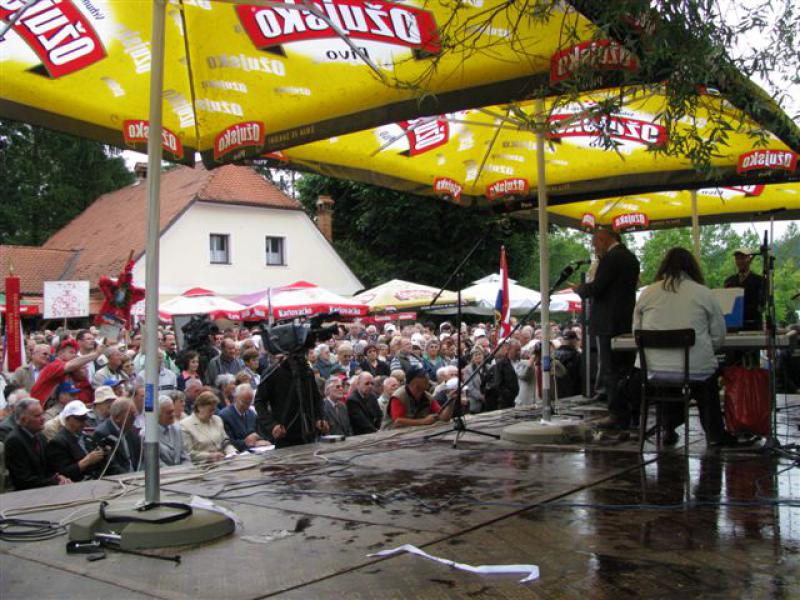 Former president's speech at traditional celebration of the Youth Day in Kumrovec.

Dear friends from  Croatia and the countries of the region,

I'm glad to be here with you today. Here I am, as an honorary president of the Association of Anti-Fascist fighters and anti-fascists, and as former Croatian president. But here I am first and foremost as one of you, as someone who on the basis of historical facts evaluates that Josip Broz Tito was a great personality of his time. He was someone who should be remembered and who should be paid tribute to for what he did - both during the WW2, and in the postwar period.

Did he have faults, did he make mistakes? Yes - definitely!

Yet, his strategic decisions were not wrong.

Surely, it was not a mistake when he called for an uprising against the occupiers and their domestic helpers.

It was not a mistake when he refused  Stalin'sdictateand placed Yugoslavia into a position between blocks, yet, a position that wasn't restricted, but gave her a greater maneuverability and the ability to choose it's way.

It was not a mistake when he chose worker's self-management system, seeking the possibility that the economy of that time could go toward the unexplored path that was neither capitalist stock, nor a state economy.

It was not a mistakewhen he, building on the ideas and initial basis from Bandung, during the historic tripartite meeting that took place on Brioni, established a firm basis for the Non-Aligned Movement which was respected by the big and powerful at that time, inspite the fact that it's was not always their favorite.

And, finally, it wasn't a mistake when he encouraged the adoption of the Constitution from 1974., - Constitution that defined republics as states and Tito used it as an instrument for preventing a real danger that he was aware of - that - after his death, Yugoslavia could disintegrate precisely as it did at the end – in destruction, blood and fire.

None of these decisions were wrong.

However, when I say this, I must add that the worker's self-management system,the way it was practiced, proved basically bad, because it made the economy bureaucratic, and workers still hadn't received what they should - the power of management on the funds for work which ensured their existence.

And I must add that the Constitution from 1974. failed to prevent the consequences that Tito was apparently afraid of, although the constitution contained instruments for a peaceful disintegration, if it would be determined that the federation is untenable. Why did this happen -we know well.

Therefore, although some of life-saving ideas and actions were strategically justified, there was also the practice which showed that sometimes the concepts cannot be equaly well accomplished. And we must be aware of that fact.  Because -it's the truth.

And when I say „truth“, in fact, I get to the point that explains the reason of our gathering. Should we place "Titovka" with a red star on our head? It may happen, but that is not why we are here.

To express nostalgy for the times when we were young, the same times that - from today's perspective – seem even nicer, even more beautiful than they really were?

It may also be that, because it is legitimate, but still it is not the reason why we are here.

Actually – because of the truth about us and our roots.

It is sad, but true, that we are the last bastion of defense of the truth in front of more aggressive onslaught of historical revisionism. In the present Constitution of the Republic of Croatia it is written, however, that it was built on the grounds of anti-fascism, but I'm afraid that we remember it  - at the level of state politics -  only on certain occasions, and that these anti-fascist basics did not integrates into everyday life. Nor is it wanted for them to integrate.

It is exactly the opposite: in everyday life there is a relativization of the criminal character of the Ustasha regime-here, in Croatia. In everyday life we are witnessing the raising of Chetnik leader Draza Mihajlovic to the throne of a national hero -in neighboring Serbia.

In everyday life we are bombarded with books written bytotally unqualified authors presented to us as historians and who describe Tito as a monster, a criminal, a soulless dictator who thought only about his luxurious life.

In everyday life we witness effort of some people in Slovenia who are trying to find as many mass graves as possiblewhich are immediately, after being found, defined as graves of victims of communism – in other words - Tito's victimsand this is also taking place in Croatia.

I would like to say something about it. Right now and right here.

National Liberation Struggle was bloody and brutal. The practice of revenge was inaugurated by occupiers and their domestic helpers, through the execution of innocent hostages -civilians after the individual actions of partisans or undercover fighters

in occupied cities. Every now and then this  was practiced by the National Liberation Movement too.

I say, every now and then, as it was not thepolicy, nor the common practice - as opposition to what the other side did.

Tito is persistently accused for being responsible for the execution of captured members of Ustasha Movement and Home Guards after Bleiburg. His two famous orders from the end of war in which it is insisted that the prisoners must be treated in accordance with international law, are declared as a propaganda trick.

I'll read You another command. It dates from the 8th November in 1941., with Tito's  signature and threatens the death penalty for killing prisoners. And it says, I quote: "The captured enemy officers and soldiers have to be taken by the guards to our closest partisan commands which will then undertake the investigation of those individuals from among the prisoners with the evidence that they had performed any kind of atrocity or violence. Our military partisan units must, more than anybody else, strictly respect the rules of war and hold high the untarnished flag of our heroic Partisan Units of Yugoslavia ", end of quote.

I repeat: Tito's command from the end of 1941. And there is no comment required.          And I'll read you something else, excerpt from an article published in 1944. This is the fourth volume of the Library of the People's Liberation Front of Croatia titled "Traitors lay down your weapons, otherwise you will be destroyed." I highlight the expression: destroyed.          In this article we can read the following, I quote: "The fascist invaders, members of Ustasha movement and Machek followers can only do one things, to hand over the weapons and surrender to the People's Liberation Army and People's Liberation Movement. If they fail to do so, they should face the consequences. The hypocritical laments about their victims won't be of any use.

Speculators and traitors who are preparing resistance to the Liberation Movement will be responsible for the victims who will fall in the final assault.

And one more thing from the same text: "The People's Liberation Army holds firm and ready weapons in their hands. Who resists this force, will be mercilessly overrun and destroyed, " end of qoute.

These words, including "overrun and destroyed,"  were written in 1944., but they were not signed by Tito. No, they were  signed and written by Andrija Hebrang. Neither this require any further comment.

On the subject of revenge after the WW2, I will say something else. Bearing in mind the horrors of the occupation and all that what the invaders did, the Nazi-Fascists, and their domestic helpers, revenge could not be avoided. I do not approve it, but I must say that it couldn't be avoided. Equally neither one of the european countries which was under occupation managed to avoid it.

However, these countries do not tarnish the names of the leaders of their Resistance Movements.

In addition, the resistance which was organized by Tito's Communist Party, was unique in Europe. War Prime Minister of Great Britain, the legendary Winston Churchill said in Parliament that the Communist in Yugoslavia had the "honor" to lead the Resistance Movement. And they led the Movement to an honorable end, to the victory. So Yugoslavia was the only country in occupied Europe that managed to free itself - with the participation of Soviet troops in the final liberation of Belgrade, based on agreement with Tito's Supreme Headquarters.

And they  want all these to be forgotten and they want all that to be depriciated, but in the same time having both eyes closed to crime and corruption which ruled in our country and against which I – as President – persistantly, but with relatively low success tried to fight, for ten years.

To be closing our eyes to the history textbooks which offer to younger generations an incomplete and often distorted and false image of the past events.

To be kept quiet in front of the breakthrough of primitive, and highly transparent  redrawing of history and to silently tolerate efforts to turn winners, with the label of criminals, into defeated, and defeated ones that were a part of the criminal system - into winners.           And to persistantly ignore the neglection of soldiers of the People's Liberation War for many years, rather than to equate them in everything, really everything with the Homeland War defenders. They deserve it! If there were no members of Tito's forces to liberate Croatia, defenders would have no land to defend, because Croatia would not exist. And it's the truth that needs to be said and repeated.

The man who we remember here today, in his native village, was also asoldier and a politician, and a statesman. When he died, U.S. media have described him as "the last of the great from the time of the WW2." He left his mark not only in Croatia, not only in the countries of former Yugoslavia, but also in the world.

He left his mark in history. Do you think that the first common Franco-German history textbook by coincidance, includes terms "Tito", "Titoism" and "non-aligned" ?

Josip Broz Tito, with all its virtues and flaws, successes and failures,  belongs to history, which he partially created by himself. But in this history we have to fight for a true picture of him and of his time. And at the same time we must never forget one thing: Tito, just like any other historical figure should be assessed only in the context of the time in which he lived and worked, in accordance with the criteria that were then, not now, relevant for evaluating anybody's role.

Therefore, due to historical truth, and truth about Tito too, we are here today. Thank You for Your attention!