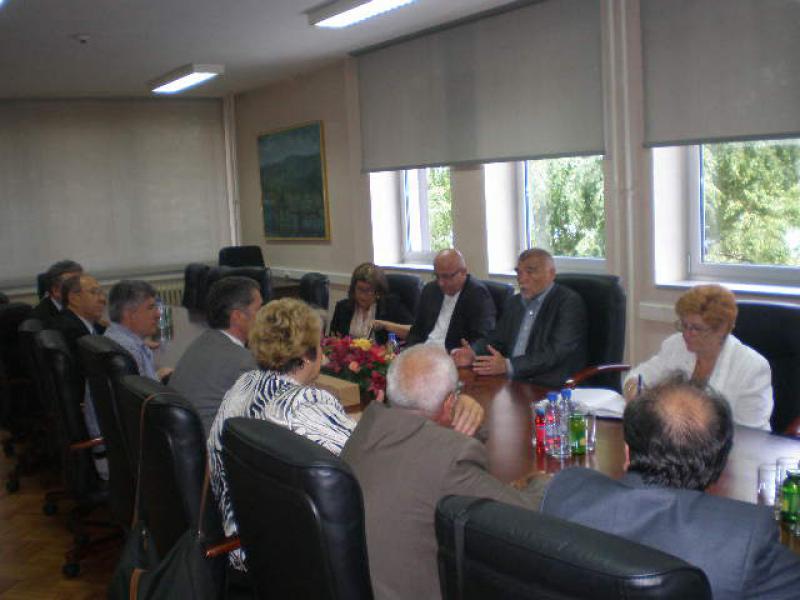 Former Croatian President, Mr. Stjepan Mesic, visited on 28 and 29 June 2011. Tuzla (BiH), where he was hosted by the town of Tuzla, Tuzla Saltworls, Canton Chamber of Commerce and the University of Tuzla.

Former President, Mr. Stjepan Mesic was welcomed by the evaluation as  favorite guest and friend of Bosnia and Herzegovina. The immediate occasion of his arrival was the book "The age of economic diplomacy," which he wrote with Dr. Jasna Plevnik. On this occasion, the rector Halilovic stated assertion that the Croatian president has developed his own political doctrine, whose main characteristic of that political action is always the first place sets the interest and the survival of man, built on ethical principles.          Discussions in Tuzla were attended by the current mayor Jasmin Imamovic and the War mayor Selim Beslagic. The Mayor Imamović expressed his gratitude to Stjepan Mesic for his relations with Bosnia and Herzegovina, both before, and now, but also because of the unyielding attitude of Milorad Dodik, due to his statement- "A handshake with Dodik in this region is considered to be viewed with a fear"          In  Tuzla Cantonal Chamber of Commerce Former Croatian President meets with businessmen Canton, led by President Nedret Kikanović. Describing himself as "active retirees modest impact," expressed his willingness to assist in efforts to enhance cooperation between businessmen from the Croatian and BiH, as well as their possible occurrence in third markets.         During the visit of Tuzla Saltworks, where he was welcomed very warmly, Mr Mesic was officially put into operation a new plant, and highlighted in his speech to employees, among other things, that good governance is a half success, and how to fight, although it is difficult in current conditions to maintain production and save jobs.